(Ariane Bazan) So Aliza, maybe you first want to say a few words about Howard Shevrin.

“It’s wonderful to be here again. He used to come here year after year and I’m delighted to be here. I’m happy to be here and I’m also sad to be here and I know that Howie would have loved to be here especially to present or to hear about those people writing about him. Because that was really one of his main wishes and hopes: to see that there are students, researchers and scientists who will carry on his work.

I’m calling him Howie. His name was Howard but everybody knew him as Howie. Howard was truly a renaissance man, a man of all seasons – a very smart guy, a very busy guy devoted to his work, to his large family – that I was luckily part of that. But a man who loved his life, loved his work, his research and the people he worked with. He loved his students, his patients, all of those that he came in touch with day after day. And it is those who I thank and honor.

I also personally thank Bob Berry because of his enormous involvement financially and in every other ways. And then some of his students who are here: our wonderful Ariane [Bazan] here and Marks Solms, Lisa Ouss and Gertrudis Van de Vijver, the late Jaak Panksepp with whom he worked. Both of them were really good friends. And also the late Marjorie Pfeffer who used to sponsor dinner parties in New York, after meetings there. So these and more people have contributed to his work.

Howie died a month before his 92nd birthday. He truly had a wonderful life. The night he died we were saying ‘goodnight’ and he reminded me: ‘‘be sure you wake me up! Don’t let me sleep too late.’’ This is now on Thursday night and he said: ‘‘I have a meeting Sunday morning with the research group in our house and I have to go over some stuff before the meeting.’’ These were his last words. These are the words he spoke before he died. Research!

His legacy through this prize this is a new beginning. This is what he wanted: that students, scientists, teachers and patients would continue his work. And so I thank you all for inviting me here and I wish you a good legacy.

In honor of the special friendship of three men – Alfred Pritchard Sloan, William Clare Menninger and Karl Augustus Menninger – and in honor of Howard Shevrin, who died in Ann Arbor on January 18, 2018, a one thousand dollar prize was awarded to an emerging researcher and a two thousand dollar prize to an established researcher at the occasion of the 20th International Neuropsychoanalysis Congress in Brussels, 18-20 July, 2019. 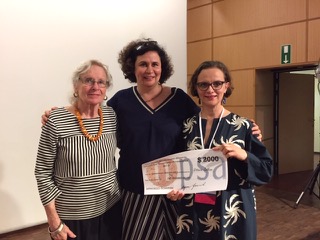 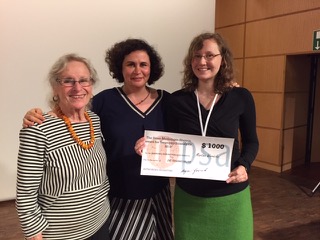