To submit information about a regional group, please click here.

About the Society        Society Leadership and staff

Promote the Society in your own language

The International Neuropsychoanalysis Society was founded in London, in July 2000, to promote interdisciplinary work between the fields of psychoanalysis and neuroscience. 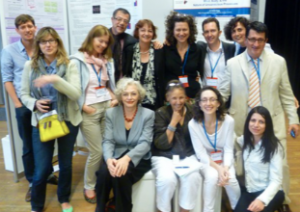 The Society was founded to provide a forum for clinicians and scientists who think it is important for psychoanalysts and neuroscientists to speak together, to educate each other, and to work together, because we are studying the same thing.

Increasingly, the activities of the Society have reduced the “taboo” of speaking the languages of neuroscience and psychoanalysis to each other.  As our congresses and publications have received greater attention, young scientists and clinicians have been able to integrate brain and mind early in their careers, leading to enriched contributions to the clinical and experimental literature.

The Co-chairs of the Society are Mark Solms – a psychoanalyst and neuropsychologist – and Cristina Alberini, a neuroscientist based at NYU, who is also trained in psychoanalysis. The late Jaak Panksepp, a pioneer in affective neuroscience, was the first Co-chair. The Society Secretary is Nikolai Axmacher (a neuroscientist based at Ruhr University Bochum, in Germany), and the Treasurer is Irith Barzel-Raveh, a clinical psychologist and organizational consultant based in Israel. Andrea Clarici is the International Liaison Officer for the Society. The Liaison Officer for South America, Central America and Mexico is Daniela Flores Mosri (a psychologist and psychotherapist who teaches in Mexico City); and the Liaison Officer for Canada and the United States is Richard Kessler (a psychiatrist, psychoanalyst, and neuropsychoanalytic educator in New York City).

With hundreds of members around the world, the Society is also linked with over forty on every continent except Antarctica — with groups in almost every European country, from Eastern Europe to Scandinavia; Turkey; Israel; South Africa; Japan; several countries in Latin America; and all of North America.  Maria Sonia Goergen, a pediatric neurologist in Porto Alegre, Brazil, is Regional Liaison Officer.

In addition, the Society produces a scientific and scholarly journal, Neuropsychoanalysis, published twice a year, presenting empirical and theoretical papers of relevance to the field, book reviews and reports on the work of the Society’s Regional Groups. The Co-editors are Richard Kessler and Iftah Biran, with Daniela Flores Mosri as Managing Editor and Jane Abrams as Production Editor. David Olds is Target Articles Editor. The Journal is published by Routledge, an imprint of the Taylor & Francis Group. Online access, or alternatively access to both online and print versions of the Journal, is available through Society membership. Members can access the Journal here.

The Society organizes an annual Congress on topics of mutual interest to psychoanalysis and the neurosciences. Our first congress was in London 2000 on Emotion and was followed by annual congresses:

Our next congress will be in Tel Aviv-Yafo. Society members receive discounts on the Congress fees and other benefits.

To join the Society or to renew your membership, please click here.

Please note that the Society is now a credentialing and qualifying organisation for eligible members, in addition to being a general membership organization. It hosts a Clinical Register for current Society members who have also completed specialist training in neuropsychoanalysis. Please click here to see the Clinical Register and the qualifying criteria for being listed on it.

Members not listed on the Clinical Register are not permitted to use their membership status for promotional purposes.

The affairs of the Society are managed by the Neuropsychoanalysis Foundation in New York City.

The exciting new NPSA Learning platform is available now! Check it out by clicking here.